UNITED NATIONS CONVENTION ON THE RIGHTS OF THE CHILD (UNCRC) 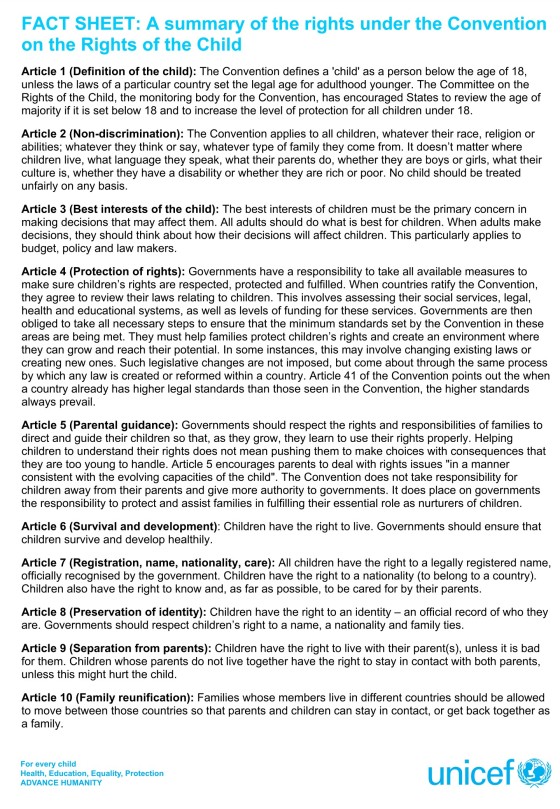 What is the UNCRC?

The United Nations Convention on the Rights of the Child, or UNCRC, is the basis of all of Unicef’s work. It is the most complete statement of children’s rights ever produced and is the most widely-ratified international human rights treaty in history.

The Convention has 54 articles that cover all aspects of a child’s life and set out the civil, political, economic, social and cultural rights that all children everywhere are entitled to. It also explains how adults and governments must work together to make sure all children can enjoy all their rights.

In 1989, governments worldwide promised all children the same rights by adopting the UN Convention on the Rights of the Child, also known as the CRC or UNCRC. The Convention changed the way children are viewed and treated – in other words, as human beings with a distinct set of rights instead of as passive objects of care and charity.

These rights describe what a child needs to survive, grow, and live up to their potential in the world. They apply equally to every child, no matter who they are or where they come from. All children have rights, even those affected by conflict or emergencies, like the recentearthquake in Nepal.

Read about our work to promote children’s rights in UK schools.

There are also a number of agreements, calledOptional Protocols, which strengthen the Convention and add further unique rights for children.

Unicef is the only organisation working for children recognised by the Convention. All UN member states except for the United States have ratified the Convention (Somalia is in the process of finalising ratification of the Convention). The UK signed it in 1990, and it came into UK law in 1992.

The UN Committee on the Rights of the Child is in charge of making sure that the Convention is properly observed by the countries who have signed it.

Voices of the American Intelligence Media

Insight, strategy and change for the legal profession

The BEST Parent Is BOTH Parents!

Survivor of an Irish Industrial *School*.

How Child Protection Services Buys and Sells Our Children

PAS is a Scam

Has the Government disregarded my family's Fourth Amendment provision for protection from unreasonable seizures?

A single mother's plight to raise awareness of Domestic Violence and Abuse and to change our broken family court system.